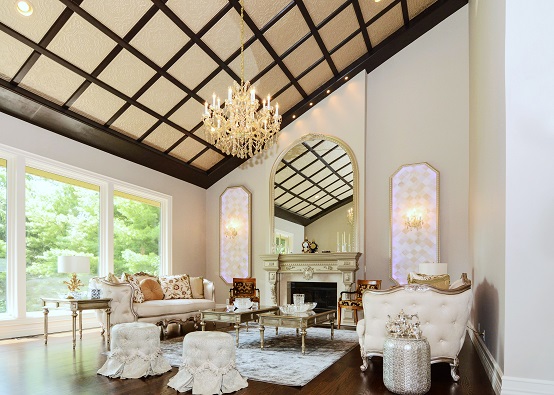 A Vision for High-End Homes

From her office in Detroit’s northern suburbs, Reem Akkad with Reem Akkad Design works on homes many designers can only dream of: places with lofty interiors and beautiful details, owned by people with big budgets and a desire for the best money can buy. For our high-end issue, she reflects on the pros and cons of working on these projects, how to secure high-end clients and what people in her region want from top-of-the-line window treatments.

Akkad was born in the United States but lived throughout the Middle East as a child, traveling to countries such as Saudi Arabia and Syria thanks to her father’s career as a doctor. The lack of a consistent place to call home was difficult at times, she acknowledges, “but looking back, I think it really helped me gain an added layer of depth. When you move a lot, you learn about adapting to new environments and going with the flow. It helped me become a people person.” It also contributed greatly to her aesthetic. “I have that combination of east and west that comes through in my designs,” she says. “I love the richness of traditional details and elements, but I like bringing it around in a fresh way.”

When it came time to start college, Akkad already knew she wanted to be an interior designer. “I’ve always loved the arts and creativity,” she says. “I think I get that from my mom. She’s not an interior designer by trade, but when she designed our house it was beautiful. When we were traveling, we would always look at furniture and fabric. That had a big influence on my choice to become designer.”

Akkad earned her bachelor’s degree at Damascus University and her master’s at Michigan State University. Her first interior design job was with the commercial firm Harley Ellis Devereaux. But when she started a family, the flexibility of having her own firm lured her away. She started Reem Akkad Designs in 2011.

Given that her background was in commercial design, she only had one home to showcase in those early days: her own. As it turned out, that was all she needed to convince potential clients to trust her with their projects. “Once you do a job right, that person becomes your marketer,” she says. “I’ve been lucky with these people I’ve worked with because I’ve been able to build a relationship with them. I’ve ended up with all these strong friendships.”

Right: The luxurious window treatment is made with ombre-striped bronze and teal drapery panel that puddles to the floor. It is accentuated with a teal sheer fabric with pin-tuck detailing and gold accents. Photo by John Carlson, Carlson Productions.

Indeed, Akkad says word of mouth is by far her most powerful marketing tool. But that isn’t the only way she attracts high-end clients. “A lot of it is networking,” she says. “You have to try to reach those clients where they are.”

Social media has also been a valuable marketing tool. “It’s a great way of identifying your target audience and getting in front of them,” she says. A contractor helps her shoot great pictures, which is important for exhibiting the exquisite homes she designs. Her Instagram account is full of before and after shots of the types of high-end projects she pursues.

“Something that’s really helped me with marketing is winning design awards,” she adds. “It legitimizes you in front of people who are out there looking for designers. It tells them you’ve been recognized for the work you’ve done.”

The Highs and Lows of High-End Projects

The white onyx tiles flanking the fireplace are backlit with LED lighting and can pulsate with vibrant colors or emit a warm white light, adding to the sophistication and elegance of the room. Photo by Agnes Jawoszek.

There are many great things about working on posh projects. “There’s a lot you can do when you get a good budget for it,” Akkad says. “I love to do things that are out of the box, something the client is not expecting.”

For high-end projects, the stakes are also higher. “The fabric isn’t a $30 fabric, it’s $500 fabric,” she says. “You have to triple- and quadruple-check every decision and order. Mistakes are going to be costly for the designer to make. And you don’t want your client to lose trust in your vision or your ability. It requires a lot more attention to detail.”

One of the biggest lessons she’s learned-and something she regularly reminds herself of-is to believe in herself. “Have confidence in your work and in what you do,” she says. “With so much out there in magazines and on social media, it’s so easy to doubt yourself and think this is not what you’re meant to be doing. But I think at the end of the day, everyone has something to say. No one else has your unique point of view and perspective. It’s so important to be proud of what you offer.”

Subtly-striped roman shades add softness to a dining room that the client described as “a gold room fit for royalty.” Photo by John Carlson, Carlson Productions.

“A space with no window treatments feels incomplete,” Akkad says. “That’s the crowning element for space. They add a lot of visual height, so you can really manipulate space with them. Even if you have really low windows, you can use window coverings to give the illusion that the windows are larger. If it’s within budget, you could always visit phoenix windows and doors and have new, bigger windows installed. You can also pull out and accent a space with them, or you can have them stand on their own. They have functional elements, but the aesthetic element is so powerful.” Window treatments are never an afterthought for her project, but rather a central component full of elegance and beauty.

Generally, Akkad is finding that homeowners are drawn to simple window coverings right now. “People are not wanting the swags and the more intricate sewing,” she says. “I am seeing more color. It used to be that with window coverings, you wanted them to stay neutral, but now people are more willing to take risks with color and pattern, which I think is very fresh. It adds a lot to the interior. It’s good to know that up front, though, so the drapery can stand on its own and not compete with other elements in the room.”

For people who want luxurious drapes or shades, Akkad often uses faux silk or embroidered linen, which she says is huge right now. She’ll also add trim along the leading edge or bottom of a panel to add interest to an otherwise simple design. “I love mixing cool and warm color palattes to give flexibility for future accent color additions and to add balance to a space,” she adds. “Part of that is mixing metal finishes.”

And while some of her clients want a blinged-out pad that looks like something out of a designer’s fantasy, it’s more common for Akkad to get requests for low-key residences that are high on livability. “At the end of the day, it’s all about the client’s aesthetic and making their home feel like a home to them,” she says.

2 Nature-Inspired Color Schemes to Explore in 2021

Green Woods: A Look at Wood Window Treatments and Sustainability

2 Nature-Inspired Color Schemes to Explore in 2021

See Your Name in Print: How to Get Your Work Published